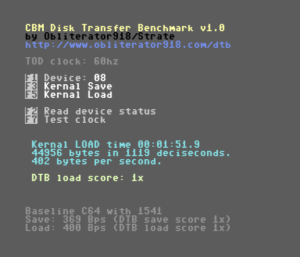 So, exactly how slow is a 1541 disk drive on a Commodore 64? And how fast is your favorite fastload cartridge? You can use this tool on your Commodore 64 to find out… plus or minus a decisecond.

In reality, there are a lot of considerations when it comes to Commodore 64 storage options. Compatibility, cartridge freeze options, convenience, and capacity are all as important as speed. Don’t forget that nostalgic feel of sliding in a floppy, typing load, and feeling the drive head bang around as it struggles with the copy protection. And once you get past JiffyDOS speeds, you probably won’t notice much difference as you climb the ladder squeezing just a few more seconds out of your load time.

But as a personal project, I decided I’d like to time save and load speeds as precisely as possible, so, I fired up Turbo Macro Pro, grabbed my copy of The Commodore 64 Programmer’s Reference Guide, Raeto West’s Programming the Commodore 64, and a Codebase64 article for good measure, and whipped up this little tool you see here. No more stopwatch apps on smartphones!

I’ll paste in some of the documentation below in case you are curious, but not curious enough to download the zip file. But first, let’s look at some data!

My testing methodology is simple. I load DTB up, pop in a freshly formatted floppy (or blank disk image when I use an Ultimate 64), and then run a SAVE test, and finally a LOAD test. DTB writes/reads a 44,956 byte data file, which uses exactly 177 blocks, and times the execution of the KERNAL save or load routine using the CIA Time of Day clock (properly initialized to the correct power mains frequency using this method). You should always start with a blank disk, to avoid inconsistencies in file layout skewing your results.

How about some results! All speeds were measured on an NTSC C64 unless otherwise noted. I used the Ultimate 64 to test DolphinDOS. The rest of the tests were done on real drives and original hardware.

[Update: I am keeping a comparison of transfer rates updated here.] 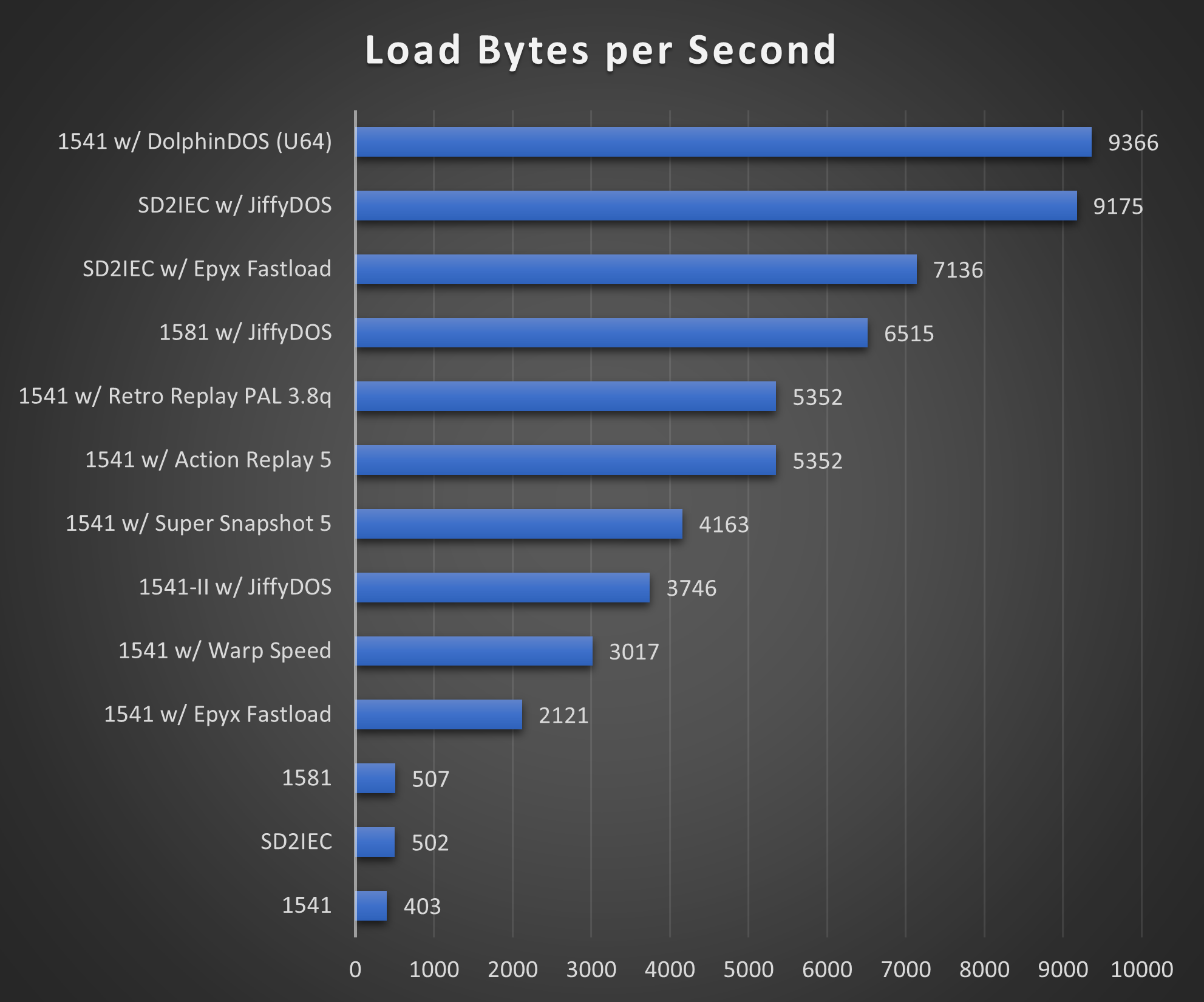 (Update: See this post for a comparison that includes Transwarp and Hyperspeed, and more comparisons on this page.)

Further ruminations can be found in this blog post.

This tool is provided so that people don’t have to post Commodore 64 disk speed comparisons based on tapping the start button on their smartphone stopwatch app.

DTB measures KERNAL SAVE and KERNAL LOAD routine execution time on serial devices 8, 9, 10, or 11. It reports speed in bytes per second and then provides a general “score” relative to a C64 and 1541 disk drive with original KERNALs.

A 44,956 byte data file (which uses exactly 177 blocks on a CBM DOS disk) is saved or loaded using a single call to the respective block transfer routine through the KERNAL jump table ($ffd8 for save, $ffd5 for load). This method allows comparison of fast loaders and the BASIC Load/Save functions.

To avoid incorrect timing due to redirected/disabled interrupts, and issues pertaining to PAL vs NTSC and 50hz vs 60hz power supply, the CIA real-time clock is used. DTB uses the method described here to initialize the speed of the CIA time-of-day clock which should work correctly on any C64.

The clock is reset to zero just before the JSR into the save or load routine, and its value is read immediately after it returns. The timing should be accurate to +/- 100 milliseconds or so.

After the benchmark save or load completes, the byte count (always 44956) and the total time is printed. Also, DTB provides two useful metrics:

As mentioned above, the baseline speeds are used to calculate the DTB Score of a save or load. I used an NTSC C64 and a 1541 disk drive, both running original KERNAL ROMs, with no fast load cartridge, on a freshly formatted disk.

The Commodore 64 time-of-day clock is quite accurate, but the precision is limited to deciseconds (1/10 of a second). DTB takes measures to try to be as consistent as possible with timing (such as waiting for the clock to update immediately before starting the load or save), but still, 1/10 a second is fairly broad for a benchmark. Therefore, I didn’t bother to provide Bps fractional values or a fractional component to the DTB score. (You can calculate those yourself based on the reported time in deciseconds, if you desire.)

Also, mechanical drives have their own factors (such as where the read head is when an operation starts, etc). Some slight variation can be expected even when running multiple times on the same hardware, and speed can be affected by mundane variables like which tracks the file is stored in. That said, my experiments show that the bytes-per-second value is consistent enough to be reliable as a good benchmark, and the DTB score is an accurate-enough “how much faster is this than the original” metric. For real floppy disks or floppy images, I recommend you format the disk and then do a single SAVE and LOAD benchmark to get your scores.

Of course, once you get to JiffyDOS speeds, a faster save or load speed is probably not as important as compatibility or cartridge freeze features. I’m not releasing this benchmark tool to advocate for any particular fastloader or KERNAL ROM. Your needs will vary based on what you are doing. The speed results DTB gives are as precise as possible given the hardware, but it’s just one data point to consider among many.

In case you are curious: As of now, the setup I use the most is JiffyDOS (KERNAL and drive ROM) on an Ultimate 64, using DMA load for most files, with an SD2IEC drive to use during assembly development. The SD2IEC paired with JiffyDOS provides a great file storage option as long as you don’t need true drive compatibility, in which case, the SD2IEC isn’t useful at all.